Every clarinet and saxophone reed can work! Here’s how, with Tom Ridenour 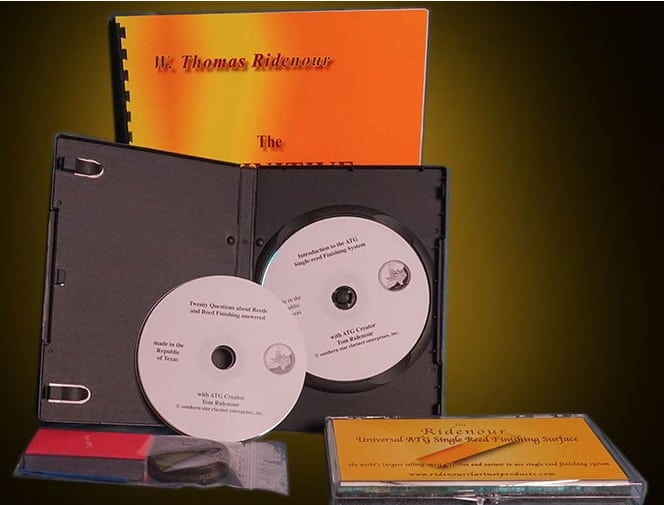 In my latest radio show for the BAM Radio Network, I had the great privilege of speaking at length with Tom Ridenour.

Tom is a world-class Clarinetist, Educator and inventor who has created a product that can truly help clarinet and saxophone musicians of all abilities perform better and more consistently.

I had to see for myself, so I bought the ATG Clarinet and Saxophone Reed Finishing System. I couldn't believe my eyes and my ears! It really does work. I immediately thought about how this product would help music educators and performers everywhere who wanted to improve their tone and ease of performance. Tom Ridenour is a graduate of Murray State University in Murray Kentucky, and Yale University. He received a BA and MM degrees in clarinet performance for those institutions, graduating with honors from both schools.

Tom has taught clarinet at the University of Connecticut, University of Georgia, Hartt College of Music, and Wesleyan University. He has given numerous performances of chamber music all over New England and New York City, toured as soloist with the New England String Quartet, performed at Lincoln Center, given a solo recital at WGBH Boston, been chief acoustical designer and manager of the Woodwind Company at G. Leblanc Corporation, is the only American to design a full line of professional clarinets for a great French clarinet maker, and has written three books on various aspects of the clarinet.  Tom's clarinet models for Leblanc were widely praise and used by professional clarinetists such as Eddie Daniels, Larry Combs, and Ricardo Morales.

In 2000 Tom published the first complete pedagogy of the clarinet in the history of the instrument, The Educator’s Guide to the Clarinet. It has been widely praised at the best book written on playing and teaching the clarinet.

Prior to that he published “Clarinet Fingerings; a Guide for the Performer and Educator,” in 1985. It subsequently became the standard reference text for clarinet fingerings.

In 2005 Tom began Ridenour Clarinet Products, a company that sells and distributes his proprietary line of clarinets, hand made clarinet mouthpieces, and other products he has created, including the ATG Reed Finishing System, the world’s largest selling and most popular reed finishing method.

Tom ‘s clarinets are being played around the world and in several major orchestras.

Tom presently lives with his family, two dogs, and a belligerent cat in Dallas, Texas.

“The ears of the reed are like 2 stereo speakers…when they are out of phase, they cancel out each other…”

“In my 20-year search, I wasn't just looking for yet another reed finishing method among all the others, I was looking for three features the method must have:

Personally, I haven't had reed problems since the early 1980s, but the more I learned about pedagogy the clearer it became to me that the reed was the main obstacle preventing the student from achieving consistent progress regarding correct playing mechanics. And of course, the reed, more than any other aspect of clarinet performance, was the perennial problem for players of all skill levels in achieving a consistent high artistic and technical level of performance.

Tens of thousands of young players NEEDLESSLY struggle to play each day in their respective performance organizations.”

They don't need to struggle anymore.

Tom's ATG Reed Finishing System is so simple to use and will save musicians and clarinet and saxophone teachers tons of money on reeds because they can adjust every reed to work.

Here's a fun video for you to check out Tom balancing reeds blind! (Yes, he has a towel over his head as he balances some reeds!

Check it out below:

Click below to get your Free Video on 3 Tips to Fatten Up Your Saxophone Tone, and start sounding like your favorite player today!

Get Your Free Video ? Here