How to play over a solo break; Eric Marienthal funk saxophone licks over Cold Duck Time 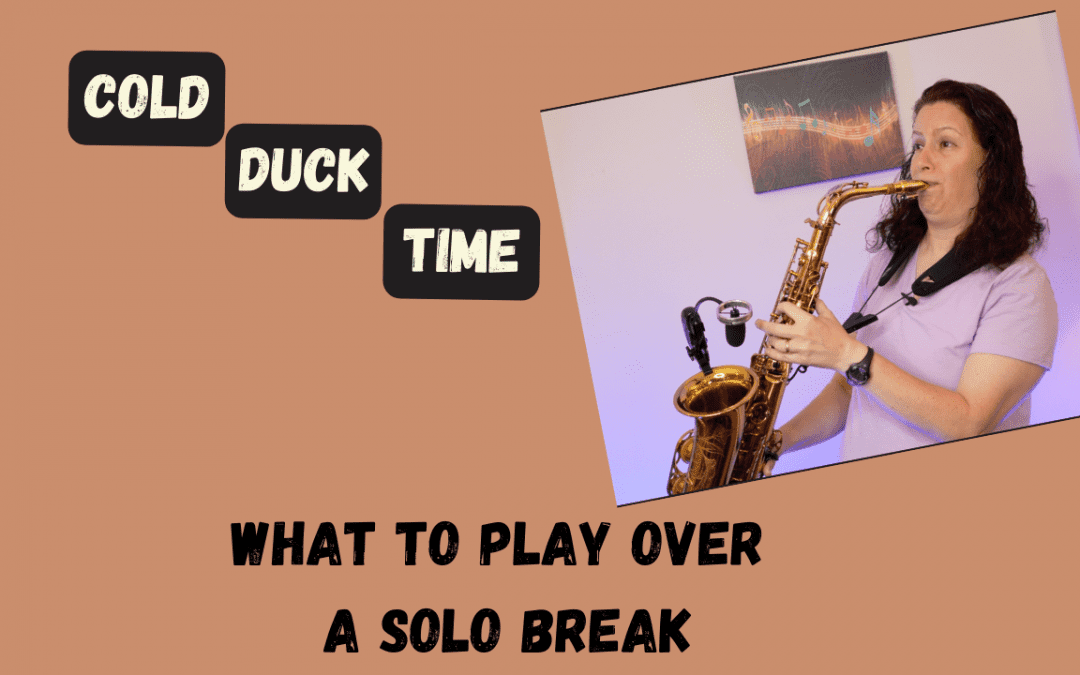 Playing over a solo break on saxophone can be daunting.

What exactly do you play?

What if there are no chord symbols – can you just play any notes?

The best answers to those questions is to study what others have done first.

This includes transcribing breaks that you like and doing a quick analysis of the note choices, the key of the song and noticing if there are chord symbols over the actual break.

If there are no chords noted over the solo break, best practice is to look at the key of the song, the last chord before the break and the very next chord after the break.

One of the most popular songs where there is a solo break, is in the Eddie Harris song, Cold Duck Time. This is a popular funk/soul tune that is often called at jam sessions.

One of my favorite performances is from Eric Marienthal at a NAMM (National Association of Music Merchants) Jam (VandoJam in 2017) in Anaheim, CA.

The original Eddie Harris version has the classic “scream” during his solo break (around 1:50 in the video).

This song is in Concert F (Alto Sax key of D, Tenor Sax/Trumpet key of G), and uses the I7 and IV7 chords throughout most of the form. The last 4 bars adds 2 new chords: bVIMaj7, bVII(add9).

The last chord before the solo break is the I7 – most performers use notes from that chord and its chord scale (Mixolydian), as well as the Concert F Blues scale.

The thing is, during a solo break, the soloist has to keep really solid time (even if the drummer is playing the hi hat on either every beat or on 2 & 4).

The best way to keep solid time is to always be subdividing the smaller beats so that the lick you create accents the time feel.

You will definitely hear that in the 2 performances…and you'll also notice they both don't play a lot of different notes.

For example, there are repeated patterns in Eric's licks, and Eddie is using note choices from the Blues scale but adding a bit of space. You can easily feel the time and tap your foot to both.

In the following 2 videos, I break down 2 licks from Eric at various tempos so you can hear what he's doing.

I chose these 2 licks because they are great vocabulary and really fun to play.

You will notice that I have you listening to the lick many times before showing any music. This is important because the way it sounds is very hard to capture with sheet music.

Here is the first Solo Break lick from Eric Marienthal:

Here's another Solo Break Lick from Eric from the same performance:

After you have learned these 2 licks at a tempo you are comfortable with, start transposing them to other keys so that they become part of your vocabulary.

I'm curious…which lick did you like better? OR, did you like the solo break licks Eddie harris played the best?

Let me know in the Comments below…